Since TransLink released their new mobile Next Bus site with real-time GPS updates of bus locations, I’ve been trying to find ways to get the data and rehash it into something that  Metro Vancouver transit enthusiasts (more specifically, enthusiasts who chase buses and monitor the transit system’s operation) will find useful.

There were two main shortcomings of TransLink’s site from the viewpoint of a transit enthusiast:

So I created a system which gleaned information from the TransLink site and aggregated it into a useful interface which I called “T-Comm”. 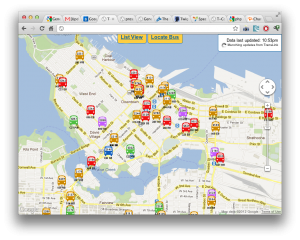 This is named after CMBC’s Transit Communications centre which has an interface similar to what I created.  Using the information I was also able to add additional functionality like grabbing the bus’s schedule for the current trip and even the entire day. 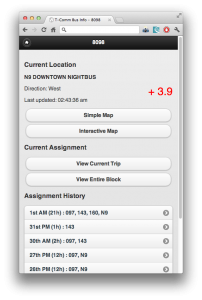 Since most transit enthusiasts would be using this on the go, I knew I had to make this site mobile-friendly. The enthusiasts I knew used a myriad of mobile devices including Blackberries, iPhones, and Androids, so it would not have made sense for me to create a native app for each of the platforms; it would have killed me in terms of time and energy.  I chose to use jQuery Mobile and Google Maps API as the basis of the frontend.  The backend is powered by PHP/MySQL. I was amazed at the ease I was able to make something mobile-friendly using jQuery Mobile.  It was actually fun too.  More importantly testers reported positively on their mobile devices.

I’m hoping that TransLink will release the GPS data officially for developers.  They’ve said after April 2012 on Twitter, so I’m crossing my fingers.

Contact me if you would like access to the site.  Since the current site hammers TransLink’s servers I’m trying to tread lightly.  Once official GPS data is used I will open it to the public, but I don’t really see this being used by the public as it is quite enthusiast-oriented.

Update: The site has been updated to use TransLink’s official data feed for real time bus data, so here’s the link: http://tcomm.bustrainferry.com.  More info on this site can be found on my T-Comm project info page.

3 thoughts on “Side Project 1: Real Time Bus Map in Vancouver”